Fly Girl and Flat Out hosted old friends from Delaware today. It was day two for some of them. Off sight casting flies hopefully at cobia. We worked and area of beach all day seeing fish off and one. John released a fish right out of the gate on Flat Out and on Fly Girl JD released a great 40 pound fish. I thought we were in the chips. The action slowed until noon and then both boats started seeing fish. For the next hour we all had shots and lots of follows and some bites. After than hour it was pretty much done for the day. Of course the wind blew a ton.
Sight fly fishing for cobia is not easy. They can be annoying piling on a fly and then the next fish ignoring the same fly. The more I fish for them the less I know. This is a totally different game than drift chumming. So far this year they have not responded to the chum. They are traveling north as fast as they can. 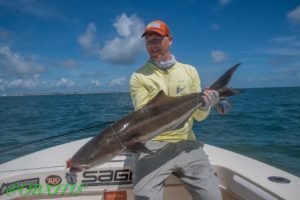