Morning started a little sketchy when I piled it up in the S curve. We were looking forward to getting out there from the reports we had from yesterday.  Today the wind shifted more to the east and there was a swell on the shoals.  When the tide started flooding it brought muddy water in with it.  There were scattered albies chasing pilchards, ballyhoo, spearing and finger mullets.  We started the morning finding birds and big explosions and flying pilchards.  At first glance it looked like jack crevelle.  But we soon found out differently.  It turned out to be school of about 20 to 30 tarpon getting a snack.  As soon as Sarah and I pulled up they moved off the bait and started rolling to the northwest.  Well what you going to do??  We followed them for about 1 miles and had several great shots with a fly–but from what I know about tarpon –rolling and traveling fish don’t eat and they did not.

Albie fishing was tough but we 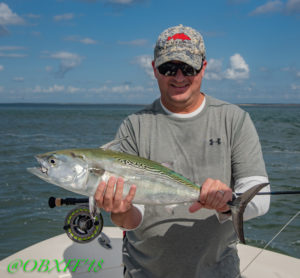 encouraged by the numbers of fish we saw.   We landed a pair on fly and Fly Girls crew had some on Albie Snaxs.